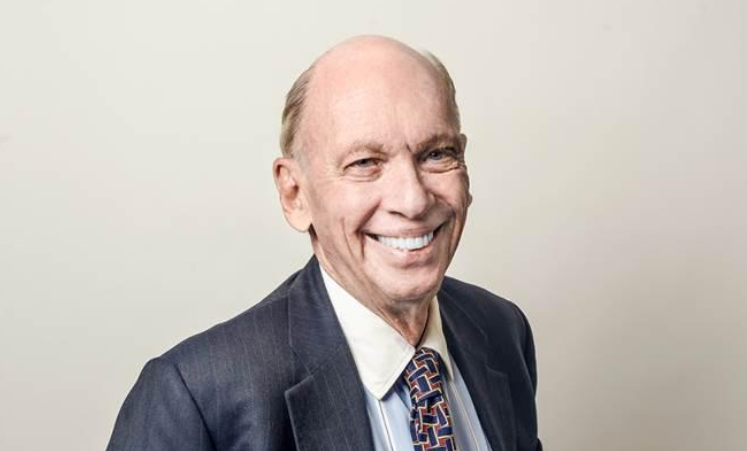 Time for another round of predictions?

Byron Wien was once among the most-famous investment strategist in the world and he co-authored the seminal book Soros on Soros.

The 87-year-old has largely faded from public view but resurfaces from time to time and his annual list of Ten Surprises always gets headlines. Last year his list extended to 14 and wasn’t released until early January. We hope he’s back for another edition soon but in the meantime, let’s have a look at how he did this year.

The weakening world economy encourages the Federal Reserve to
stop raising the federal funds rate during the year. Inflation remains
subdued and the 10-year Treasury yield stays below 3.5%. The yield curve
remains positive.

Would this have really been a surprise? He was right that they stopped but didn’t see the total reversal. Ten year yields peaked at 2.7% in January of last year and the yield curve did invert.

Partly because of no further rate increases by the Federal
Reserve and more attractive valuations as a result of the market decline
at the end of 2018, the S&P 500 gains 15% for the year. Rallies and
corrections occur but improved earnings enable equities to move higher
in a reasonably benign interest rate environment.

The S&P 500 is up 28% year-to-date largely because of Fed cuts and continued multiple expansion. Earnings haven’t improved.

Traditional drivers of GDP growth, capital spending and housing,
make only modest gains in 2019. The expansion continues, however,
because of consumer and government spending. A recession before 2021
seems unlikely.

These all start to tie together and get back to the Fed cutting rates. Consumer and government spending were certainly the drivers of GDP growth but housing was a tailwind as well.

The better tone in the financial markets discourages precious
metal investors.Gold drops to $1,000 as the equity markets in the United
States and elsewhere improve.

Gold never dropped more than $10 below the year-opening level of $1280. Instead, Fed and other central bank easing boosted it to $1480.

The profit outlook for emerging markets brightens and investor
interest intensifies because the price earnings ratio is attractive
compared to developed markets and historical levels. Continuous
expansion of the middle class in the emerging markets provides the
consumer buying thrust for earnings growth. China leads and the Shanghai
composite rises 25%. The Brazil equity market also comes to life under
the country’s new conservative leadership.

The Shanghai Composite is up 22% year-to-date and the Bovespa up 34%. Great calls.

March 29 comes and goes and there is no Brexit deal. Parliament
fails to approve one and Theresa May, arguing that a change in
leadership won’t help the situation, remains in office. A second
referendum is held and the U.K. votes to remain.

This is all wrong, but it’s certainly a reminder of how uncertain Brexit was going into the year, and how hard it is to predict the future.

The dollar stabilizes at year-end 2018 levels and stays there
throughout the year. Because of concern about the economy, the Federal
Reserve stops shrinking its balance sheet, which is interpreted
negatively by currency traders. The flow of foreign capital into United
States assets slows because of a softer monetary policy and a lack of
need for new capital for business expansion.

The dollar was stable but the Fed expanded its balance sheet and it hasn’t hurt the currency, at least not yet. The flow of foreign capital into the US has been relentless this year.

The Mueller investigation results in indictments against members
of the Trump Organization closest to the president but the evidence
doesn’t support any direct action against Trump himself. Nevertheless,
an exodus of Trump’s most trusted advisors results in a crisis in
confidence that the administration has the people and the process to
accomplish important goals.

There certainly wasn’t an indictment against Trump.

Congress, however, with a Democratic majority, gets more done
than expected, particularly on trade policy.Progress is made in
preserving important parts of the Affordable Care Act and immigration
policy.A federal infrastructure program to be implemented in 2020 is
announced.

No infrastructure plan was announced but it finally looks like USMCA is going to get done.

Growth stocks continue to provide leadership in the U.S. equity
market. Technology and biotech do well as a result of continued strong
earnings. Value stocks other than energy-related businesses disappoint
because of the slowing economy.

This was close to perfection. Growth certainly led the way and tech stocks had a sensational year. Value stocks disappointed but energy stocks were trashed.

Geopolitical tensions increase. Iran continues to destabilize
the Middle East and Kim Jong Un fails to live up to his North Korea
denuclearization promises. Secretary of State Pompeo and National
Security Advisor Bolton make statements indicating the United States may
take pre-emptive action in both places, thereby causing one of several
sharp market sell-offs. But in spite of hostile rhetoric, the United
States does not go to war with anyone as we approach the 2020 election.
Trump’s tough talk on some issues like trade works, however, and leads
to successful diplomatic negotiations on national security.

North Korea was fairly low-key this year. This is a reminder that fears about the area were higher in early 2019.

In desperation China engages in ambitious infrastructure
programs to bolster its economy. China grows at 6.5% real, but the
increased debt causes concern around the world and has a negative impact
on the renminbi.

China announces, “We want to be the world leaders in free
trade.”It sends envoys around the globe to negotiate better bilateral
trade terms in order to offset the losses from the ongoing U.S.
disagreements. Joint ventures in which foreign companies control the
majority share are initiated in all sectors, from industrials and autos
to raw materials. As China’s influence around the world becomes greater,
the U.S. further isolates itself.

China’s strategy has been to preserve and strengthen the multilateral system, not to make bilateral deals, but the rest is arguably right.

The European Central Bank is forced to restart quantitative
easing in response to a defiant Italy, a weakening Germany and
Brexit.Thwarting expectations that Brexit would bring the rest of Europe
closer together, Italy realizes that it can break all fiscal rules
without any fear of punishment from the E.U. As a result, the Italian
economy falls into recession, debt spreads surge and the ECB is forced
to liquefy the system again.

The ECB certainly went back to bond buying but Italy wasn’t a big factor and the big surprise might be that no one is flouting the fiscal rules.

If you just isolate his market predictions and ignore his ideas on how we get there and the political talk, he did very well. US, Chinese and Brazilian stocks all crushed it this year. He was off the mark on gold but I’ll look forward to what he has to say about 2020.